Home About Us Meet Our Kiddos JR

Finding the Right Place for Healing

When an Illinois State Trooper knocked on his door, Jim Gray knew right away something serious had happened.

His 17-year-old son, JR, had been in a car accident on Halloween night 2020 and was airlifted to a trauma center in Springfield, Illinois.

That fateful night launched a year-long journey to recovery.

After the accident, JR spent eight days in the hospital with a broken foot, fractured spine and an injured spleen. A few days after he went home, his dad had to take JR back to the emergency room due to severe stomach pains.

It was just in time. JR’s bowel had ruptured and was infected and leaking into his stomach.

“The doctor said if we had waited another day, JR wouldn’t have made it,” Jim says. “That hit hard and we realized how serious JR’s condition was.”

JR had immediate surgery—the first of seven abdominal surgeries JR would have over the next 17 days.

Over the next two months in the ICU, JR struggled. His stomach wound wasn’t healing due to infection and he had to have part of his colon removed. Unable to eat, he lost 40 pounds while receiving nutritional support through his veins.

“Nothing was working to get him better,” Jim says. “We would take one step forward and four steps backward—we were never gaining ground.”

Going Above and Beyond

Finally, JR was transferred to St. Louis Children’s Hospital on Jan. 4, 2021, for more specialized care. His wound was so extensive that he required sedation in the ICU for his dressing changes. It took a month to get the infection under control.

JR was left with a volleyball-size wound in his stomach. Doctors told Jim that JR needed intensive ongoing wound care. He also needed therapy to help him regain his strength. 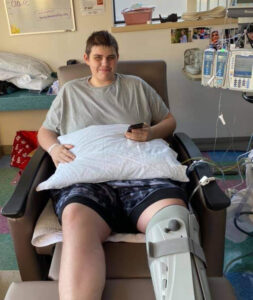 After researching rehabilitation hospitals, Jim found Ranken Jordan Pediatric Bridge Hospital for the next step in JR’s care. It became a vital path toward healing.

“Everyone at St. Louis Children’s Hospital praised Ranken Jordan and highly recommended it for JR’s continued care,” Jim says. “It was a smooth transition to Ranken Jordan.”

“Barb went above and beyond with JR and was involved with his bandage changes nearly every day,” Jim says. “It was comforting to know Barb would be continuing to care for JR at Ranken Jordan.”

Barb is the first and remains the only pediatric nurse practitioner in the St. Louis area with a Wound, Ostomy and Continence Nursing (WOCN) certification.

She is known by her colleagues at Ranken Jordan as the “wound care queen” and a “gentle force of wisdom.” Her wound expertise has made her an invaluable resource to her colleagues and patients.

When JR came to Ranken Jordan Feb. 3, he had several complications related to his large, open wound, including fistulas, or holes, that developed in his intestines that were leaking acidic gastric juices. It took at least two to three hours each day for JR’s wound care.

“Fistulas are not easy to care for and hard to get rid of,” Barb says.

With 40 years of nursing experience, Barb is a strong patient advocate and goes the extra mile to obtain the resources pediatric patients need to heal.

Barb consulted with various suppliers to find specialized materials for JR’s wound care. The biggest goal was to keep the wound clean and dry, which was a challenge since the fistulas frequently leaked.

“We used different types of equipment rarely used before to collect the drainage from the fistulas,” Barb explains.

JR’s complex and difficult dressings required Barb’s expert care and vigilance. As a result, Barb flexed her time so she could be more available to care for JR. That included holidays and weekends.

“JR had the most significant wound care I’ve ever seen in my 13 years at Ranken Jordan,” says Connie Simmons, MD, a pediatric hospitalist at Ranken Jordan. “It was pretty intensive. Thankfully, Barb has expertise in ostomy care and wound care. A lot of creativity went into care for his wound and with fistula management.”

Taking the Time for Healing Care

In addition to his wound, JR also was still dealing with fractures of his back and foot from his accident so he wasn’t mobile initially.

“By the time he arrived at Ranken Jordan, he was deconditioned, non-weight-bearing, and so sick,” Dr. Simmons says. 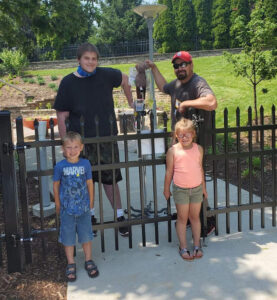 JR’s wound had to get smaller before surgeons could operate to close it the rest of the way. Healing the wound was essential to JR’s overall recovery.

“The surgeons said JR needed to be at Ranken Jordan to get the attention necessary for healing,” Barb says. “For the surgery to be successful, JR had to have grown enough healthy tissue and the fistulas needed to be contained.”

It was a long road but Jim believed in the Ranken Jordan team and continued to encourage JR in his recovery.

“Once JR was at Ranken Jordan, I could see the healing every single day,” Jim says. “He started taking steps forward constantly. The staff took a lot of time with JR and gave him so much one-on-one attention. Barb was at his beck and call and I know he would not have gotten that level of attention at a traditional hospital. The team communicated about JR a lot with me and with each other.”

Dr. Simmons agrees. “The beauty of Ranken Jordan is that we can take the time to give patients whatever they need. Our team always made sure JR’s needs were met, even when it was time-consuming. That’s why we had the success we did in helping JR heal. Ranken Jordan was the right place for his recovery. We took a team approach and were all invested in his care and well-being.”

JR turned 18 on March 26, 2021, while he was at Ranken Jordan. Although he couldn’t eat cake or other treats, child life specialists and the rest of the team made sure his birthday was special, even during the height of the pandemic. Knowing JR was a St. Louis Blues hockey fan, they threw him a party complete with a personal happy birthday video from Blues’ player Colton Parayko. Friends and family expressed well wishes through the window.

This was all part of taking care of JR’s mental and emotional health as well as his physical health.

JR’s healing to be ready for surgery took nearly 10 months. “He had a hard time gasping why it took so long to heal before he could have surgery,” Jim says. “It was hard on him mentally. But at Ranken Jordan, the nurses took time to talk and play video games with him to distract him and lift his spirits. JR is very private but he came out of his shell with them.”

Due to the pandemic, JR’s outings and visitors were limited. That inspired Jim to hoist a bird feeder up a 20-foot tree outside JR’s window so JR could enjoy visits from feathered friends. Each time Jim came to Ranken Jordan, he refilled the feeder so the Cardinals, Blue Jays and other birds could entertain JR.

As JR inched closer to surgery, Barb went with JR to his appointment with the surgeon.

When JR first arrived at Ranken Jordan in February the hole in his stomach was 15 centimeters in diameter. By July, it had healed to 5 centimeters.

“It was finally small enough for the surgeon to close,” Barb says. “The surgeon saw how much JR had improved and he was ready to do the surgery. Based on JR’s progress, the surgeon told us to keep doing what we were doing.”

Dr. Simmons says JR exceeded expectations. “We thought JR would be with us at least a year. But from February to July, he did so much healing. JR and his family were committed to everything we were doing so we were able to accomplish so much healing in a shorter amount of time.”

“JR is a tough kid and went through a lot,” Barb says.

Dr. Simmons and Barb credit Ranken Jordan’s teamwork as another reason for JR’s successful healing. Pharmacists and dietitians worked closely with the team to provide optimal nutritional support for JR. And when JR couldn’t get out of bed to go to therapy, therapists came to his room and did exercises with him there.

“The nursing staff was extremely attentive too and supported him mentally,” Barb says. “Child life specialists also helped JR learn how to cope and distracted him during treatments and dressing changes. We all knew our part in JR’s care. We were successful with JR because of the way we worked together as a team.”

In addition to healing his wound, Ranken Jordan helped JR gain his strength back.

Dr. Simmons says while some people only think of Ranken Jordan for rehabilitation, such as learning to walk again, Ranken Jordan can take care of any problem.

“Wound management is a big part of our care in addition to caring for patients with traumatic brain injuries or orthopedic issues. Wounds are one of the most complicated medical problems out there. Because of our team approach, we can take the sickest kids with complex issues and help them heal.”

“Rehabilitation is more than learning to walk,” Barb adds. “It requires comprehensive care. We can take the time to care for kids with complex issues. Finding solutions takes time. With JR, if something didn’t work, we figured out something else. We used new and different products with great results.”

On July 28, JR left Ranken Jordan to have surgery at Barnes-Jewish Hospital to close up his wound. Next stop: home.

While he had a few setbacks after surgery initially, he soon got back to being a typical teenager—hanging out with friends, working, and fishing, one of his favorite activities.

“JR was excited to be with friends again and eager to go back to work,” Jim says. “We’re also back to ‘Dad doesn’t know anything,’ so I know JR is back to normal. After all this, we’ve learned to appreciate time together more.”

After his experiences at Ranken Jordan, JR says he would like to volunteer there someday—taking kids fishing.