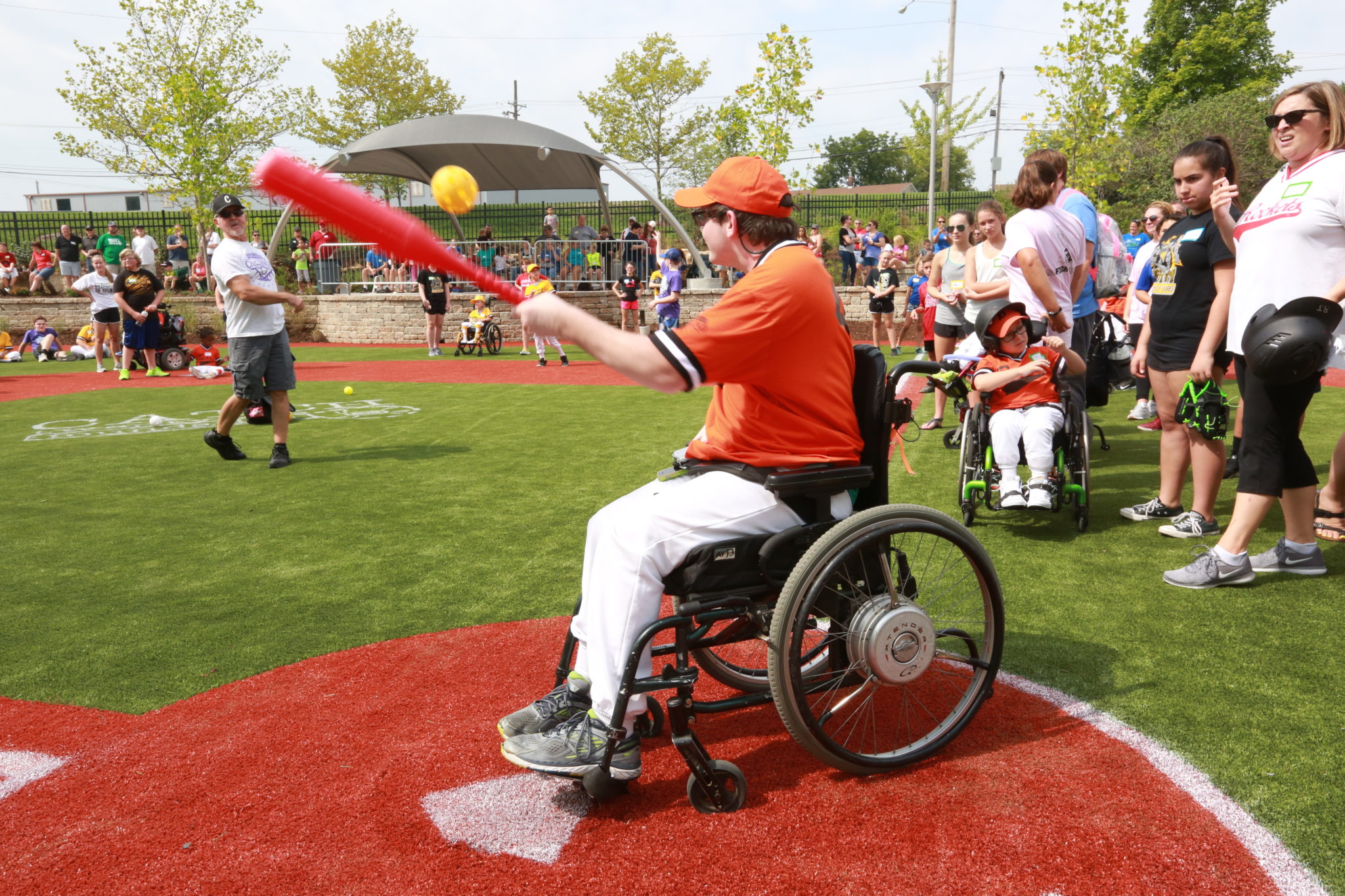 America was thrown a curveball when the COVID-19 pandemic hit this spring. We waited for months for baseball to return after an historic “pandemic delay.” While professional bats are swinging again— at least for now—one league is still waiting in the dugout: Challenger Baseball.

The Challenge Baseball League was formed nationally in the late 1980s for children with disabilities. Baseball fan Buck Smith then started a local league in 1994. St. Louis boasts 16 teams with a total of 72 teams across Missouri and Illinois.

Ranken Jordan Pediatric Bridge Hospital has fielded at least one Challenger Baseball team for the past 14 years. The Lions and Bears teams at Ranken Jordan are made up of current and former patients as well as other community members.

Before the pandemic, nothing stopped players on the Ranken Jordan Lions or Bears teams. Sporting their team’s full uniform, they rounded the bases whether they were on a gurney, in a wheelchair, or were connected to a ventilator. Meanwhile, the enthusiastic crowd cheered and memories were made.

“At Ranken Jordan, we’ve taken what the national league has created and modified it,” Smith explains. “It’s not baseball focused. Instead we focus on one goal and that’s making friends. Baseball is just the tool to make friends.”

Some of the most meaningful friendship are between the players and the Challenger Baseball Buddies. Buddies are children and young adults ages 10-25 who volunteer to assist the players on the field or around the bases.

“Sometimes it’s the first time these Buddies have met someone with a disability,” Smith says. “Challenger Baseball breaks down barriers. The kids and the Buddies develop strong friendships and they learn how to relate to each other. Many Buddies come back year after year.”

The cancellation of Challenger Baseball has taken a toll on these opportunities for friendship and fun.

“Although we had to cancel the season to ensure everyone’s safety, it’s a true loss for these kids who look forward to being with other kids and being part of a team,” Roe says. “Some of them have never been able to be part of a team because of a disability, which is why wearing a uniform means so much to them. I know at least one of our kids has slept with her trophy from the season, too.”

And at the end of the season, the players typically enjoy a celebration complete with a trophy presentation, hot dogs and other entertainment.

“Challenger Baseball isn’t about us or the parents—it’s about the kids,” Roe says. “If they have a great time, then so do we.”

The benefits of Challenger Baseball are a grand slam. “It improves children’s self-esteem and confidence and also allows them to be the center of attention for reasons other than a disability,” Roe says. “It gives the children and their families a sense of normalcy. Siblings, parents and grandparents can cheer the child on during the game. And they get to see the child in a different setting than in a hospital.”

Building a Field of Dreams

Roe recalls other challenges the first few years of Challenger Baseball at Ranken Jordan. They started on a grass field that wasn’t fully accessible. The grass made it difficult to use a rolling walker or wheelchair. But Roe proves where there’s a will, there’s a way.

One Christmas Eve, former St. Louis Cardinal’s player and manager Mike Matheny visited the children and staff at Ranken Jordan. After he asked the children what they wanted for Christmas, he asked Roe what she wanted. She told him she dreamed of an accessible baseball field for the children. That go the ball rolling.

“Mike was excited to help make that happen,” Roe recalls.

Thanks to Mike and Kristin Matheny’s Catch-22 Foundation, a multi-purpose, adaptive and accessible synthetic baseball field was installed at Ranken Jordan in 2018. The built-to-scale field has hosted dozens of Challenger Baseball games, All-Star games, soccer games, golf, and many other activities. The field’s flat surface gives all children the opportunity to participate in games to the best of their abilities.

“Miracles do happen,” Roe says. “Mike funded the field and I got my Christmas wish for the kids.

The Ranken Jordan team played in parking lots, basketball courts while waiting for the new field to be completed. And it was worth the wait, Roe says.

“The Ranken Jordan field is the most beautiful field in the league. Opening day on the new field was very emotional. It was wonderful how it all came together.”

While the official league is canceled for the year, Roe is determined to find a way the children can still safely play on the field this fall with Ranken Jordan staff and patients. However, the Buddies won’t be able to participate this year because of the pandemic and we won’t be able to play other teams in the region.

“I have no doubt we will play again,” Smith says. “But we will not take a chance with the kids’ health.”

Meanwhile, technology is pinch-hitting for actual play. Smith keeps the St. Louis Challenger Baseball players connected through themed Zoom calls on Saturday mornings when the teams would have been playing.

“The kids are missing hanging out together,” Smith says. “I can see their eyes go from square to square to see all their friends’ faces on the Zoom calls. And I really miss seeing the kids on the field smiling and laughing. Before being involved in Challenger Baseball, I had no friends with disabilities. Now I have hundreds. These kids are the best people.”

Smith says he is a better person since working with the children in Challenger Baseball. “Every day, these kids face something brand new that they have to overcome, even before the pandemic. We could learn a lot from them in dealing with adversity and having the courage and patience to address challenges. When I struggle, I think what would my friends at Ranken Jordan do? It helps me keep a good outlook.”

While high fives may not be on the roster for a long time to come, Smith looks forward to the exciting day the teams can return to the baseball field. “When this pandemic ends and we can play again, we’ll go crazy.”