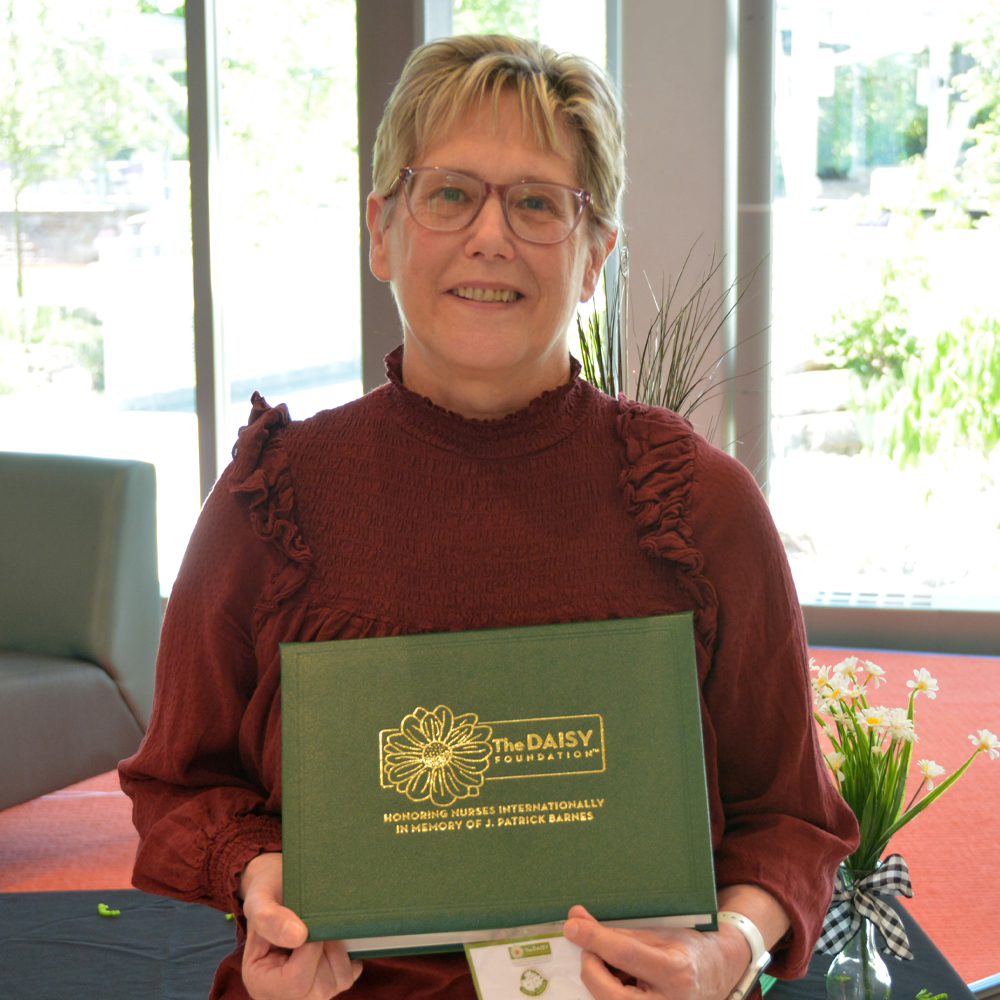 It’s not often when a name perfectly aligns with a person’s character. But Barb Champion is an advanced nurse practitioner who is a genuine champion for the children she cares for at Ranken Jordan, especially those with complicated burns and wounds.

Because of Barb’s tireless dedication (she has even come in on her day off to care for particularly complex patients), her co-workers nominated her as a DAISY Award winner in 2021. It was no surprise to them when she was selected as a winner but it was to Barb.

“I’m grateful to receive this award but I was surprised I was nominated because I felt like I was just doing my job,” Barb says.

That selflessness is one of the primary criteria for DAISY Award winners. The DAISY Award is an international recognition program honoring extraordinary nurses for their skills and compassion. Nurses are nominated by patients, family members, or team members.

A Dare to Succeed

From the time she was a little girl, Barb knew she wanted to be a nurse. She sought out every TV show she could find that featured nurses and she devoured the pictures and treatment advice in her grandma’s antique medical book.

In high school, Barb was drawn to science but her counselor was concerned she didn’t have the test scores to get into nursing school. That assessment challenged Barb, who saw it as a dare. “I told myself ‘I can do this,’” she recalls.

Like a true champion, she did. After high school, Barb was accepted into nursing school and received her associate’s degree in nursing. But that was just the beginning of her achievements in her nursing education and career.

After she married her high school sweetheart, she went on to pass her nursing boards on her first attempt, pursued her bachelor’s degree in nursing over a 10-year span while she worked and had five children, then received her master’s degree in nursing and passed her boards in 2003 to ultimately become an advanced nurse practitioner. Whew.

“I literally went to school straight from kindergarten to age 40,” Barb says with a laugh.

Building a Wealth of Experience

In the early 1980s, Barb began working at Cardinal Glennon Children’s Hospital on the medical floor where she cared for the hospital’s first patients on ventilators outside the ICU. She eventually became the dialysis coordinator and opened the first hemodialysis unit at the hospital.

In 2006, she came to Ranken Jordan to more fully apply her nurse practitioner degree. She was an adjunct instructor for Maryville University so she oversaw a clinical group of nurses at Ranken Jordan, too.

But she felt something was missing from her skill set. “I knew the medical side of nursing but wanted to learn more about the surgical side,” Barb says. “So I left to do general surgery nursing at St. Louis Children’s Hospital in 2008.”

There, she learned more about providing skin and wound care for patients after general surgery. With new knowledge in hand, Barb came back to Ranken Jordan in 2010 where she has happily remained ever since.

Barb’s experience in wound care triggered her desire to pursue a Wound, Ostomy and Continence Nursing (WOCN) certification, which Ranken Jordan supported when she returned to the hospital.

“It was a year-and-a-half, intense program to receive the WOCN certification,” Barb explains. “It is a hard course to pass and stay boarded in. Much is geared toward adults rather than pediatrics. But it’s considered the gold standard in wound care.”

Barb became the first and remains the only pediatric nurse practitioner in the St. Louis area with a WOCN certification. Recertification is required every five years; Barb was certified in 2015 and recertified in 2020.

Her wound experience has made her an invaluable resource to her colleagues and the patients she cares for at Ranken Jordan. Her colleagues frequently ask Barb to look at complicated patient wounds for her expert advice.

“Barb is the wound care queen and a nurse like no other,” says Katy Cox, RN, a nurse at Ranken Jordan. “She is extremely knowledgeable about wound care and is always willing to teach other nurses.”

Other co-workers also sing her praises. “Barb goes above and beyond to provide support for some very complicated wounds,” explains one colleague. “Often this involves her coming in on her days off to help trouble shoot with nurses and the medical team. She applies evidence-based practice and truly is the reason behind why some of these patients recover.”

Another co-worker considers Barb to be “a gentle force of wisdom.” “Her wealth of knowledge is vast and what she doesn’t know, she investigates. I found her once on a holiday reviewing a video in her office to find yet another option for a patient’s wound. Her expertise and high regard for each patient has made her an exemplary nurse practitioner and employee. I have been honored to work alongside her, learn from her and watch in amazement as she truly touches lives and leaves patients and families in a much better place than when they arrived.”

Caring for the Whole Child

Barb’s favorite part of working at Ranken Jordan is seeing the same patients each day to get to know them and what they need to help them get home. She has been known to sing Maroon 5 songs like “Sugar” to kids to make kids laugh and calm them before a treatment.

“When you’re playful with them, you can help them relax more,” Barb says. “But you also take their cues when things aren’t going well so you can redirect them.”

Her nursing philosophy focuses on looking at the patient as a whole. “We do more than just pass medications to patients. We care for them physically, mentally, and spiritually. I want patients to feel and know they are cared for and that they can ask questions. Our patients have feelings and need extra TLC. Coming in and seeing these children every day is what keeps me going to do more.”

And it proves Barb has the heart of a champion for kids.