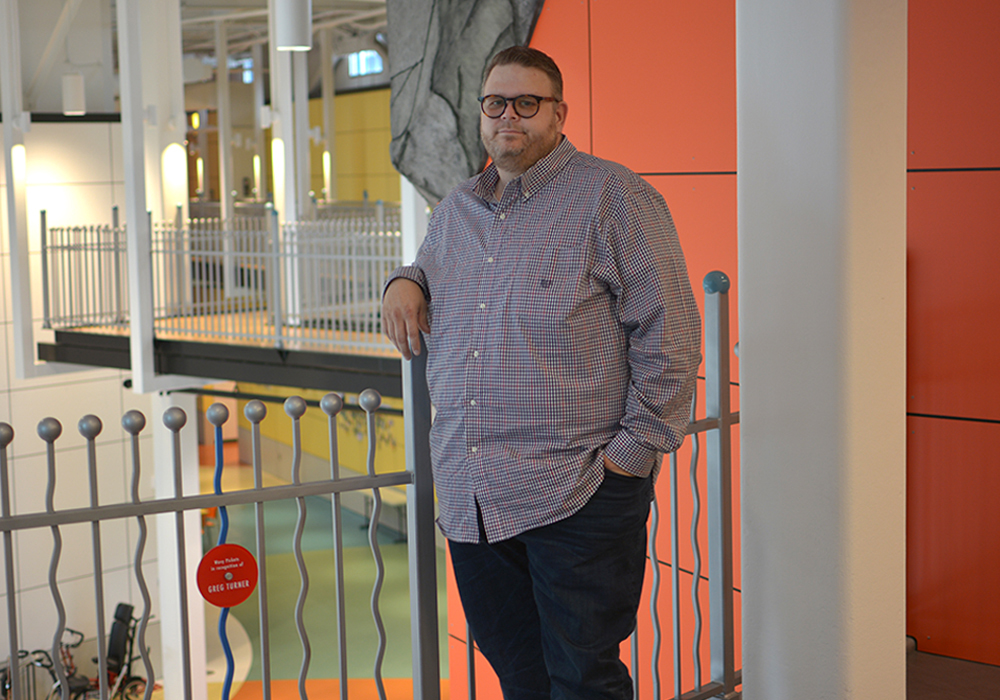 When a Job Becomes a Life-Changing Mission

Sometimes a job becomes a fulfilling mission that changes countless lives forever. That’s what happened to designer Greg Turner who influenced the design of Ranken Jordan Pediatric Bridge Hospital based on his own experiences in a wheelchair.

But Greg’s wheelchair wasn’t part of his life until after college. While he was in graduate school for architecture at the University of Kansas in 2010, he suffered from persistent back pain from herniated discs. This back issue ultimately turned his life upside down when one of the discs slipped and hit his spinal cord. Almost instantly, he couldn’t walk or feel either of his legs.

He was diagnosed with cauda equina syndrome and had emergency surgery in Kansas City. Cauda equine syndrome is a condition that occurs when the bundle of nerves below the end of the spinal cord is damaged.

After surgery, Greg spent a month in the hospital and began rehabilitation therapy.

“One day, I was able to do whatever I wanted, and the next day I couldn’t get out of bed and had to learn to be an adult again,” Greg says.

Throughout the painful ordeal, he maintained a positive attitude with hopes he would walk again.

He moved back to St. Louis so his family could care for him during his months of rehabilitation therapy. Yet even after therapy, he was only able to take a few steps with a walker and still had difficulty with bladder and bowel control. He began spending most of his time in a wheelchair in what he considered the new normal.

After visiting the hospital, he decided to volunteer at the front desk. “I loved it and found value here,” he says. “Ranken Jordan helped me find purpose in life. The kids at Ranken Jordan have been through a lot more than me.”

The stars had aligned. During and after graduate school, Greg had done independent study with an emphasis on wayfinding for those with disabilities. He put together scenarios and conducted experiments looking at people using a wheelchair, those who were hearing impaired or autistic, and those who used a guide dog to discover how people functioned in a space and how signage and wayfinding could be more effective.

These lessons combined with his personal experience and what he observed as a volunteer at Ranken Jordan inspired new ideas for better design.

“People don’t realize the impact of architecture,” Greg says. “For example, it’s proven that natural daylight is a significant healer. If we’re not providing that to individuals trying to heal, we’re not progressing in health care.”

He adds, “This project at Ranken Jordan was personal to me and I wanted to be part of it.”

As Greg dug deeper into the Ranken Jordan expansion project, a spark ignited inside him.

“When I started the expansion project, I was still in a wheelchair. But the more I visited Ranken Jordan and saw the kids, the more inspired I felt. These kids push themselves daily and I realized I needed to push myself more.”

The courage and strength of the children at the hospital inspired Greg to push himself to get out of the wheelchair and use his walker more.

“It was empowering,” he says. “My co-workers and people at Ranken Jordan were so encouraging. They saw I was making strides. I had been dependent on a wheelchair for five years, and in less than eight months, I went from a wheelchair to using two canes. Now my wheelchair sits in storage. I haven’t had a need for it since 2016. It’s incredible.”

While he still can’t feel the outside or backs of his legs and wears a brace for foot drop, Greg is thrilled with his progress and determined to make life better for others.

Greg says his disability made him a better designer. “Spending so much time in a wheelchair allowed me to think about architecture from a different perspective. I think more about the importance of door handles, hand rails and the transfers between flooring materials. And I look more closely at the utilization of space in general.”

He continues: “My philosophy is to design for all people, not just able bodied people. I don’t design buildings to be icons, I design them for purpose and meaning.”

Ranken Jordan’s building expansion project was completed in 2018 with numerous creative features and outdoor spaces. Today, bright, healing sunlight pours through the wall of windows that look out to an accessible ballfield, winding pathways, and beautiful gardens.

Greg’s thoughtful design touches are all around Ranken Jordan. One of the many visual contributions he pushed to carry over from the existing building was the fun wavy pickets that accent the railings and bridge on the second floor of the hospital.

But Greg is most proud of the outdoor ballfield at Ranken Jordan that he adamantly encouraged in the design plans. The built-to-scale ballfield includes a pitcher’s mound, perimeter lines, and logos and stencils. The field’s flat surface provides total accessibility for kids with a range of mobility challenges while providing a realistic challenge that might occur outside the boundaries of the hospital.

“It was important that the field become usable space for children who need all types of equipment,” he says. “The field represents kids being able to get out of bed to do physical activity outside. I’m so proud of the Ranken Jordan expansion.”

Ranken Jordan was named a finalist in the St. Louis Business Journal’s annual Building St. Louis Awards in recognition of expansion. The program honors real estate projects that created a community impact in the areas of investment, jobs created, or additional development. Ranken Jordan was the only hospital finalist.

Greg continues to expand his reach through his growing career. He now works at Fox Architects in St. Louis and inspires other architects to create more inclusive designs for better accessibility for all people.

“My disability doesn’t define who I am, but how I can be an influence to others,” he says. “I want to start giving back to help others find their value and purpose.”