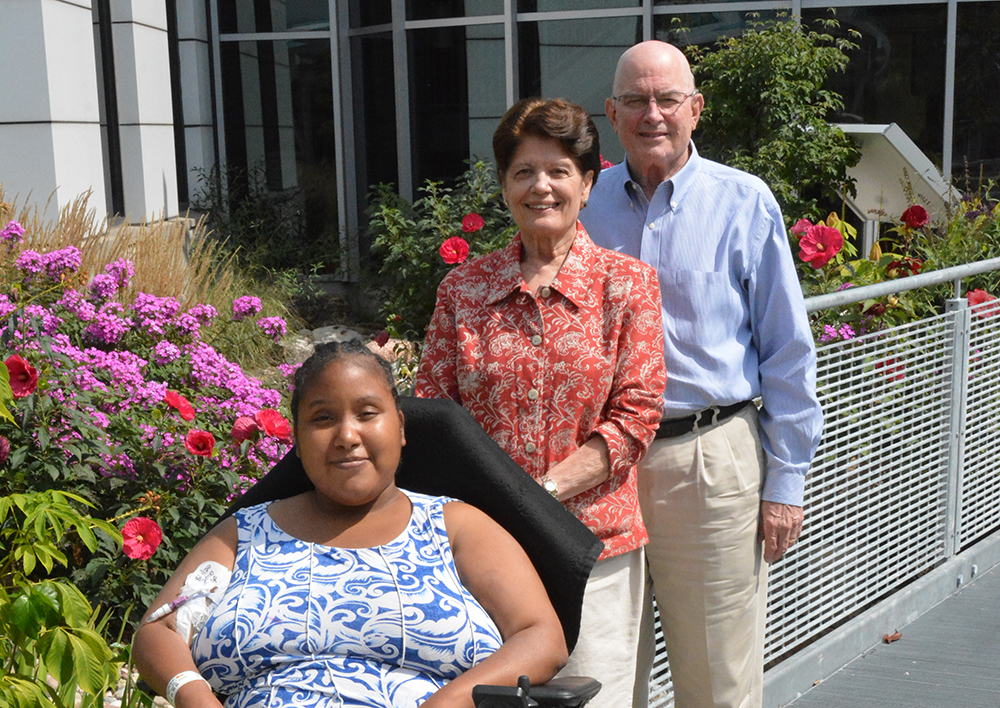 The 2020 recipients of the Mary Ranken Jordan Service to Children Award are Rich and June Vandegrift.

Rich spent his career as a pioneer and leader with McCarthy Building Companies. In 1972, he helped lead McCarthy into hospital construction management through the company’s subsidiary, McBro. Rich’s vision and fortitude was key in making McBro one of the top three hospital builders in the nation.

In December 1998, Rich officially retired as executive vice president from McCarthy Building Companies. But his work was far from over.

A Second Career with a Mission

In 1998, a friend, Jim Frey, who was a Ranken Jordan board member, introduced Rich to the hospital. Ranken Jordan was planning a small hospital addition at the time, and Jim felt Rich could offer construction expertise. Rich met with board chairman Juanita Hinshaw and Rabbi Mark Shook and was invited to join the board.

Not one to sit still, Rich enthusiastically said yes and began to devote considerable time to Ranken Jordan’s new construction project as a board member. It blossomed into more than two decades of dedication to a mission that inspired him.

“I saw firsthand how committed the staff was in helping the kids get better so they could go home,” Rich says. “The more you experience being around these kids and understanding the needs they have, the more important the mission becomes.”

Creating a Blueprint for the Future

Rich was instrumental in overseeing the construction of the new hospital facility that opened in 2004 in Maryland Heights. But the project didn’t start out with plans for a new hospital.

When Rich started on the board, Ranken Jordan was in its original location on Ladue Road in Creve Coeur in the original facility built in 1940. The limestone and concrete building had no central cooling and limited options to upgrade systems to accommodate the growing needs of children with medically complex conditions.

Because of these issues, combined with the changing health care landscape and economic challenges, Rich recognized a building expansion at the current location was “not a wise investment,” he says.

“With a need for a better facility to meet the changing needs of the patients, we decided to look for a new location,” Rich explains. “We also recognized the facility needed a different licensure than a nursing home to serve more patients.”

Rich was part of the team with Dr. Holekamp and several Thompson Coburn lawyers that successfully received a new license as a subacute hospital that changed the hospital’s financial reimbursement structure and expanded the services the hospital could offer.

Next came the search for the best site for the new hospital. With additional services planned, the hospital needed a much larger site. Rich, along with other board members and administration,  visited several sites before finding the location on Dorsett Road in Maryland Heights. The open, 12-acre grassy area was ideal for a new facility with room to grow.

“We started with a clean slate and built the hospital into what we wanted and needed it to be,” he says. “During the planning, design and building process it was as if Mary Ranken Jordan was looking down on us and guiding us. Architect Steve Hunsicker created the environment to be playful so the kids can get out of bed, get treatment, learn and have fun.”

“It was fun to hear about the progress in construction,” June adds. “While it seemed like a lot of space, it was filled with great attention to detail.”

When the bright, modern facility opened in December 2004, Rich and June were surprised and humbled to learn that a bridge in the new facility was named after them in recognition of the Vandegrift’s dedication to the hospital. Today, the colorful Vandegrift Bridge still welcomes visitors as they enter Ranken Jordan.

After the new facility opened, awareness quickly grew about the services Ranken Jordan provided. As a result, demand grew.

“Within five years of opening, we saw the need to expand again to be able to care for more kids so we started the planning process,” Rich says.

By February 2018, another major construction project was complete with Rich at the helm. Ranken Jordan increased  the number of inpatient beds from 34 to 60 and created an innovative, accessible outdoor play area.

June admires the happy atmosphere at Ranken Jordan. “The most outstanding part of Ranken Jordan is the staff,” she says. “They seem to love what they do and you can’t help but be infected by their enthusiasm. The staff goes above and beyond for the kids.”

Recognizing a Commitment to Success

Rich has served on the Ranken Jordan board executive committee for more than 20 years, chaired the board from 2006 until 2012, and has been ever-present on the building committee.

Honoring this long-term commitment that includes 22 years of service to the hospital, Ranken Jordan is proud to recognize the Vandegrifts in 2020 with the Mary Ranken Jordan Service to Children Award.

“June and I feel greatly honored to receive this award,” Rich says. “My role as a board member became a second career. Not a day goes by without me thinking about something I’m involved with at Ranken Jordan. I’ve stayed involved so long because I am passionate about Ranken Jordan and want to be part of its future success.”

Celebrating the Heart of a Champion