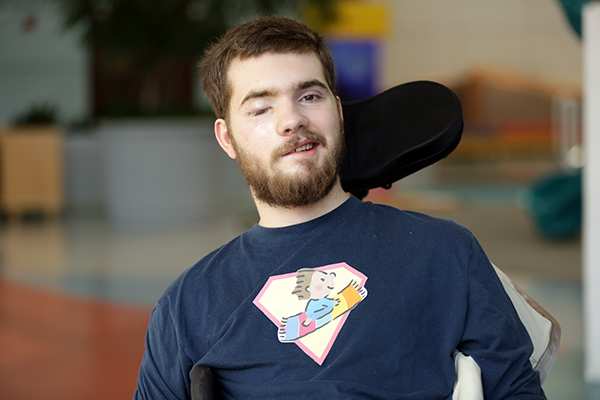 In March of this year, 19-year-old Tommy was visiting his brother in California when he sustained multiple injuries, including a traumatic brain injury, in a serious car accident. After a month in the Intensive Care Unit, still unable to speak, eat or sit upright, Tommy was deemed ineligible for rehabilitation and was transferred to a nursing home.

Because there’s no facility like Ranken Jordan in California, Tommy spent the next four months bedridden. From thousands of miles away, desperate to get her son the care he needed, his mother fought tirelessly to transport him to St. Louis so he could begin rehabilitation at Ranken Jordan. But due to Tommy’s complex medical needs he couldn’t return on a commercial flight and the cost of medical air transport was exorbitant. Only when he required hospitalization for complications from his injuries was a nursing home-to-hospital transfer and then a hospital-to-hospital transfer arranged. With the help of St. Louis Children’s Hospital’s Transport Team, Tommy was flown back to Missouri for acute care at Children’s, and then transferred to Ranken Jordan Pediatric Bridge Hospital to begin his recovery in earnest.

Tommy’s progress was rapid and dramatic. Fueled by a sense of hope and self-determination, he was a full participant in his own recovery and his viewpoint and his health soon improved dramatically. He got out of bed, became more social, resumed speaking and learned to feed himself again. Just as important to his recovery, he began to have fun! He smiled, laughed, and showed off his wry sense of humor. He rekindled his interest in art and began to think about his future. He made friends with fellow patients, volunteers and staff. He told visiting medical students his firsthand account of lying in his room alone for months and how grateful he was for a place like Ranken Jordan.

On the day Tommy went home, almost eight months after his accident, he promised to return, not as a patient, but as a volunteer. He wants to renew in others the hope Ranken Jordan has restored in him.