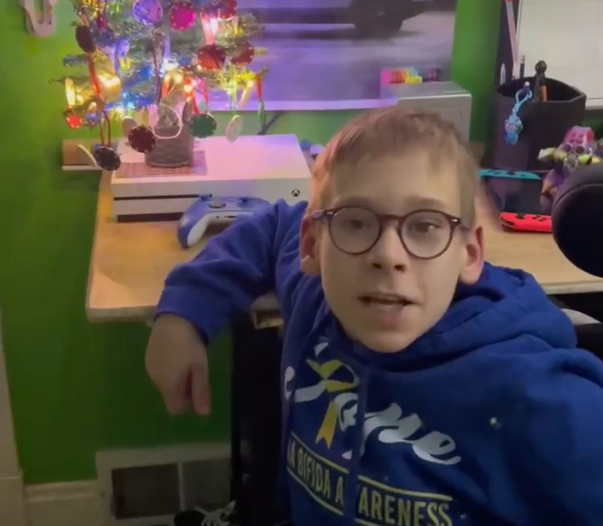 A young Santa in a small Tesla Cybertruck will be cruising the halls of Ranken Jordan Pediatric Bridge Dec. 21 at 4pm to deliver toys to every child. And this jolly guy bought every gift himself in appreciation for what Ranken Jordan means to him.

Santa, AKA Ryan Joseph, or RJ, spent his first Christmas at Ranken Jordan 10 years ago when he was just a few weeks old. Since then, he has returned for outpatient therapy and plays Challenger Baseball each season at Ranken Jordan.

RJ’s Christmas story has a happy ending. But his life didn’t have such a happy beginning.

Born with a severe form of spina bifida, RJ’s spine didn’t form properly and he had fluid on the brain. RJ also had club feet and signs of illegal drugs in his system at birth. He spent his first four weeks of life at Cardinal Glennon where he had a shunt placed in his brain to release pressure and had surgery to remove the large mass on the outside of his back caused by spina bifida.

Yet the tiny, fragile boy had an undeniable fighting spirit. At 5 weeks old, he was transferred to Ranken Jordan while he waited for a foster family who could care for him and his special needs.

Meanwhile, an Illinois couple, Shannon and Joseph, had been in the process of adopting a child they were fostering for more than three years when they received devastating news that the child was being returned to what Shannon and others considered to be a dangerous parent.

“Our hearts were broken,” Shannon says. “We didn’t know if we could do this again.”

Shannon and Joseph had five children at the time. Two were adopted so the couple was familiar with fostering and the adoption process.

As they were picking up the pieces of their shattered dream, Shannon received a call from a social worker about RJ. The social worker urged Shannon to come meet him at Ranken Jordan.

“I was still very upset about losing the other little boy, but it was love at first sight when I saw RJ,” Shannon says. “After talking to a chaplain, I just knew RJ was going to be our son.”

But she had some hurdles to jump first.

Shannon, Joseph and their children visited RJ at Ranken Jordan every day to bond with him and learn how to take care of him. The family also set up a crib, bought clothes for him and prepared to bring him home.

But then the couple received word that they needed a waiver from the state of Illinois to be able to adopt him since they already had five children. They were told the waiver could take weeks or months to process. As a result, another foster family was contacted because RJ was medically ready to leave Ranken Jordan.

Miraculously, the same day another family was training to take RJ home, Shannon got the call that their waiver was approved so they could foster RJ after all. “It was the best call of my life,” Shannon says. “I believe God was watching over us that day and had a hand in making sure our son was coming home to us.”

“He is almost 11 now and has had 24 surgeries and multiple hospitalizations so he knows what it’s like to spend holidays in the hospital,” Shannon says. “He is an amazing, tough little boy who brings us so much joy and inspiration. RJ is thriving in school and has a passion for helping others and being kind.”

A Circle of Kindness

RJ is frequently the recipient of kindness as well. Last year, the family was having dinner in a local restaurant around the holidays when a women came up to their table and gave RJ $100. Instead of spending it on himself, he was inspired to do something good with the money. So he used the money to buy hats, gloves, socks and snacks for a charity that serves the homeless. 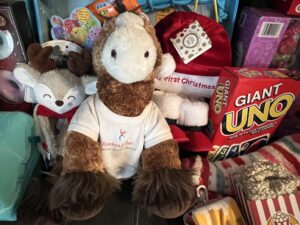 His generosity has come full circle. Paralyzed from the waist down, RJ is passionate about Teslas because he believes the self-driving vehicles will give him freedom to go wherever he wants as an adult. With that mission in mind, Walkin’ & Rollin’ Costumes built a Tesla Cybertruck for RJ to fit over his electric wheelchair. Decorated for Christmas, that “dream mobile” will be RJ’s modern sleigh for his toy delivery at Ranken Jordan. RJ will even be decked out in a Santa suit.

“He has spent many different holidays in the hospital so he knows what it’s like,” Shannon says. “He wants to do good and is so excited to deliver these toys. We couldn’t think of a better place to help out than Ranken Jordan. RJ spent his first Christmas in Ranken Jordan so it has a special place in all our hearts.”

Tricks to Banish Boo-Boos and Pain

We use cookies on our website to give you the most relevant experience by remembering your preferences and repeat visits. By clicking “Accept All”, you consent to the use of ALL the cookies.
Accept All
Manage consent

This website uses cookies to improve your experience while you navigate through the website. Out of these, the cookies that are categorized as necessary are stored on your browser as they are essential for the working of basic functionalities of the website. We also use third-party cookies that help us analyze and understand how you use this website. These cookies will be stored in your browser only with your consent. You also have the option to opt-out of these cookies. But opting out of some of these cookies may affect your browsing experience.
Necessary Always Enabled
Necessary cookies are absolutely essential for the website to function properly. These cookies ensure basic functionalities and security features of the website, anonymously.
Functional
Functional cookies help to perform certain functionalities like sharing the content of the website on social media platforms, collect feedbacks, and other third-party features.
Performance
Performance cookies are used to understand and analyze the key performance indexes of the website which helps in delivering a better user experience for the visitors.
Analytics
Analytical cookies are used to understand how visitors interact with the website. These cookies help provide information on metrics the number of visitors, bounce rate, traffic source, etc.
Advertisement
Advertisement cookies are used to provide visitors with relevant ads and marketing campaigns. These cookies track visitors across websites and collect information to provide customized ads.
Others
Other uncategorized cookies are those that are being analyzed and have not been classified into a category as yet.
SAVE & ACCEPT