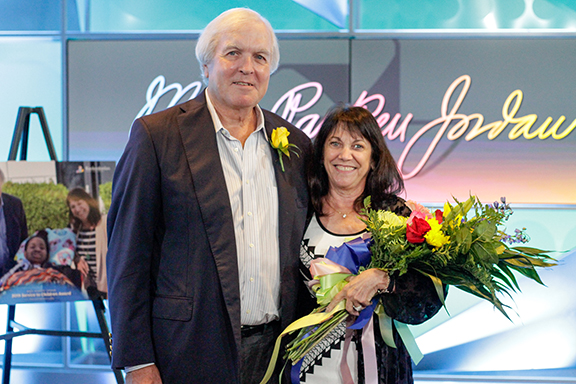 Tom and Noreen Laffey came to St. Louis in 2008 from Los Angeles when Tom accepted a job as senior vice president and general counsel for Enterprise Holdings Inc. His parents lived in Missouri so it wasn’t as hard a decision to move to the Midwest as it was for Noreen, a native Californian who owns a business in the entertainment industry.

But once they settled into St. Louis, they embraced the friendly community and easier lifestyle. 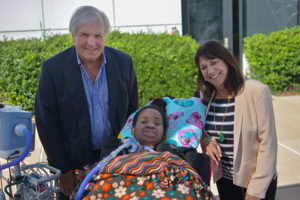 As the Laffeys became more involved in the community, they recognized the philanthropic spirit ingrained in St. Louis. Tom saw it every day in his position at Enterprise.

“Enterprise fosters a culture of giving back—it’s in the DNA of the company,” Tom says.

Tom and Noreen were introduced to Ranken Jordan by Peggy Kaplan, who served on the Board of Directors at the hospital. Peggy’s husband, Lee, was one of Tom’s colleagues at Enterprise.

“It was all over when we walked in the door, took a tour and saw the kids,” Noreen says. “You can’t see it and not get involved. It pulls on your heart strings. It’s so good to know a hospital like this is here in St. Louis if a family needs it. This place is bigger than life.”

Tom wholeheartedly agrees. “You see the value and necessity and the dedication of the people at Ranken Jordan. The hospital spoke to what’s important to us—kids. That’s why we decided to get involved.”

The Laffeys soon became immersed in Ranken Jordan. Noreen joined the board and began sharing her marketing and business expertise to help rebrand Ranken Jordan and build awareness. 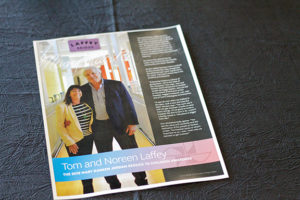 Their passion for Ranken Jordan ultimately led them to co-chair the hospital’s capital campaign in 2012, along with Mike and Susan Scully and Mike Matheny.

With camaraderie, strong networking, and enthusiasm for the cause, the Laffeys helped the campaign to successfully reach its $11 million goal, launching a $35 million expansion.

The three-story, 75,000-square-foot expansion that opened in 2018 doubled the capacity of Ranken Jordan to create a 60-bed inpatient facility to meet the growing need for specialty care. The expansion also included a rock-climbing wall and an outdoor activity canyon with a fully accessible ball field, putting green and walking path.

“To watch the expansion come together from just a blueprint was very satisfying,” Tom says. “Reality hit when we saw the building in use by the kids and families. It was a ‘wow’ moment.”

“It’s always been a miraculous place,” Noreen says. “But the scope is now bigger with this expansion.”

Through the capital campaign, the Laffeys made a donation in honor of Tom’s sister, Nancy, who had passed away. They think of her every time they walk over the Laffey Bridge that spans over the climbing wall in the expansion. “Giving to Ranken Jordan is what my sister would want us to do,” Tom says. “Nancy loved kids and passed just before our first grandchild arrived.”

While the capital campaign is over, the Laffeys have stayed closely connected to Ranken Jordan. 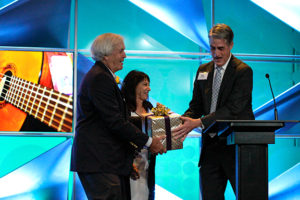 “We’ve stayed involved because the mission is so important,” Noreen says. “I have a tremendous amount of respect and admiration for the strength and resilience of the kids and their families. Because of the support they get here, they are prepared to have a life. The most important part of the concept is that they’re not in bed. Therapy is play and the staff truly demonstrates care beyond the bedside. The dedicated team lets the kids be kids—that’s how they get better. It’s inspiring.”

The Laffeys’ experience has allowed them to see “behind the scenes” at Ranken Jordan where they witnessed the team’s devotion to the children in their care. That viewpoint has strengthened their commitment.

“This is a unique place,” Tom says. “The idea of care beyond the bedside is different and special. The team takes kids out around the building and grounds and into the community. They do it because it’s what’s great for kids.”

Noreen agrees. “The staff doesn’t see them as sick kids. They make the kids as happy as they can be with hours of dedication. They truly care. You see it in the volunteers, too.”

She continues: “The people and culture are impressive. And it all started from the beginning with Mary Ranken Jordan.”

Because of their passion, Tom and Noreen continue to support Ranken Jordan through their participation in events such as golf tournaments and the gala. Their contagious enthusiasm has engaged their colleagues and friends in the Ranken Jordan mission, too. “At the gala, our friends saw the value of their support firsthand,” Tom says. “It was a meaningful moment.”

Noreen wants to continue to help Ranken Jordan grow to reach more people. “Once kids are out of ICU, they need a bridge to get home. There’s no better route for this need than Ranken Jordan.”

Tom says his experience with Ranken Jordan is an eye opener. “Families here struggle with many serious issues. It’s a window into a hard reality we don’t always see. While neither of us were children of privilege, we worked hard, were fortunate in life, and now we feel grateful to be able to help others. We hope our contributions to Ranken Jordan can ease a little of the burden for these kids and their families.”

When the Laffeys learned they were receiving the Mary Ranken Jordan Service to Children’s Award, they were honored. “I feel we’ve gotten more out of our experience with Ranken Jordan than we’ve contributed,” Tom says. “It’s more than just writing a check.

It’s so satisfying to see the progress here with the expansion. We’re proud to have partnered with other good people who contributed to make life a little easier for those dealt an unfortunate hand. It feels good.”

Daisy Award Winner is on a Mission