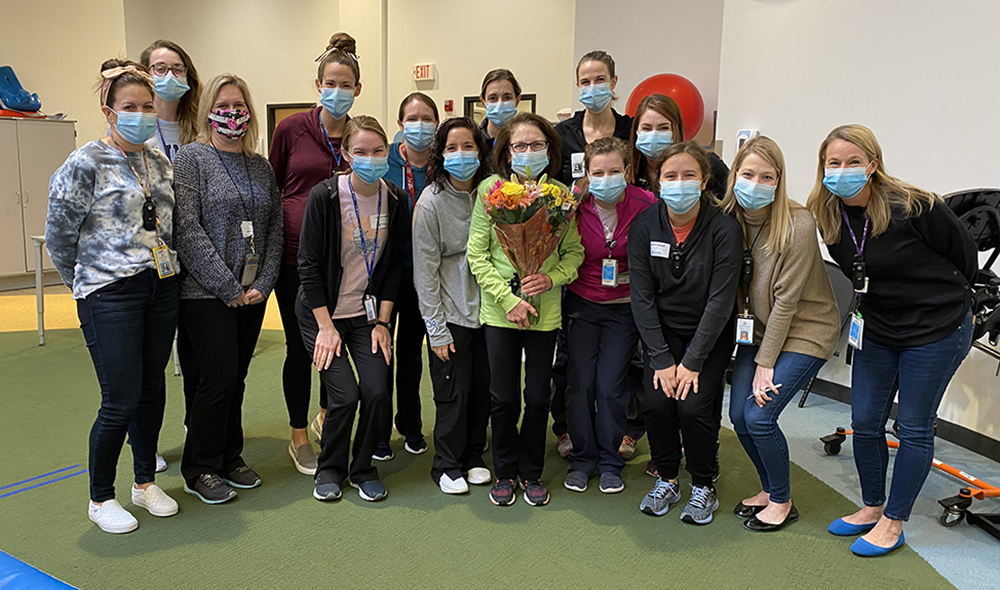 Sally Katz, a physical therapist at Ranken Jordan Pediatric Bridge Hospital, understands the importance of teamwork. So, when she was recently honored with the Florence P. Kendall Service Award, established by Saint Louis University’s Program in Physical Therapy, it was no surprise when she shared the credit with her colleagues at Ranken Jordan.

“With this award, I feel like I represent our whole team,” Sally says. “It made me feel proud of my co-workers, because any one of us could have won this award. We’re all dedicated and put patients first. I don’t do this work alone.”

Typically, the prestigious award is given to professors in the academic world of physical therapy, who have done research or written books. So, honoring someone who works directly in patient care made it all the more meaningful to Sally.

“It is a credit to our team and to the Saint Louis University physical therapy program for recognizing the importance of patient care,” she says.

Sally’s passion for patient care, teaching, and the physical therapy field are just some of the reasons Sally was chosen to speak at Saint Louis University’s White Coat Ceremony for the 2023 Doctor of Physical Therapy class, where she was presented with the award. The award is named after a woman who was ahead of her time in the 1940s and led the way in establishing the physical therapy field. Today, Ranken Jordan’s own Sally Katz is continuing to pave the way for the future of physical therapists.

Sally’s co-workers surprised Sally by nominating her for the professional award. Nominees must embody the spirit of Florence Kendall as a lifelong role model, exhibit intellectual curiosity, persist in the pursuit of excellence, contribute to the dissemination of knowledge, be dedicated to the profession, and have an enthusiasm for living life to the fullest.

Sally’s roots in patient care run deep. She began as an eager candy striper in high school and was in a health career club that once brought her to Ranken Jordan for a volunteer activity. She enjoyed talking to patients and spending time with them. Those formative years led Sally to pursue a career in nursing.

After graduating top of her class from nursing school in St. Louis, Sally worked on a hospital rehabilitation unit for over a year. The patient challenges sparked her interest in physical therapy. An inquisitive, driven nurse, Sally spent her lunches quizzing her colleagues in physical therapy.

“I wanted to find a way to help patients more and asked therapists a lot of questions,” Sally says. “Because of my strong interest, they recommended I go back to school to get my physical therapy degree.”

Newly married and fueled by an adventurous spirit, she listened. Soon after Sally and her husband, Eliot, moved to Oklahoma, she enrolled in physical therapy school while she continued working as a nurse and her physician husband completed a fellowship in endocrinology.

Life has never been dull for Sally. A year after she graduated from physical therapy school, Sally and Eliot moved to New Zealand where Sally worked as a physiotherapist and her husband completed a second fellowship.

During that time, the couple traveled extensively and even worked on a small farm in New Zealand. They enjoyed the experience of living and working in a new country, but after two years came back to the United States.

Over the next several years they lived in Texas, California and North Carolina as they built their respective careers. They also became parents to three daughters.

In 1992, Sally and Eliot decided to move back to St. Louis to care for Sally’s parents.

Nourishing a Passion for Patient Care

With extensive experience in pediatric physical therapy, Sally applied for a job at Ranken Jordan, but no positions were open at the time, so she took another job. However, thanks to her impressive resume, Ranken Jordan called her back two years later to hire her.

Twenty-six years later, Sally remains as a physical therapist at Ranken Jordan and continues to learn and grow. It’s the longest she has stayed in any one place.

“I still love it,” Sally says. “Ranken Jordan is a very special place. The mission is always putting the child first and we all do that. The hospital is small enough that we can have more one-on-one time with patients, and we know almost every staff member’s name. We work closely as a team to care for the children and give them our best. Being a team member gives you opportunities to learn from each other professionally and support and encourage each other on a personal level.”

Teaching the Next Generation While Continuing to Learn

Sally’s drive to be at the top of her game makes her a committed lifelong learner. “I have always been passionate about learning and sharing interesting facts or treatment approaches with my co-workers,” she says. “At Ranken Jordan, we’re encouraged to keep learning and growing so we continue to improve our skills and techniques.”

Sally shares her experience and expertise with her Ranken Jordan team as well as students and new physical therapists as site coordinator for clinical education and a clinical instructor.

“I feel very responsible when teaching these students and want to give them the best knowledge about how to take care of patients,” she says. “Teaching keeps me up to date on my skills and I learn from students who bring fresh ideas, too.”

In every role, she continues to tap into her nursing background. “Nursing skills and patient care are especially important at Ranken Jordan because we care for the whole family as we try to meet their individual needs,” Sally says. “Nursing gave me a solid medical foundation and taught me how to relate to people going through a difficult time.”

Sally found yet another way to combine her background in nursing care and physical therapy together by becoming a certified infant massage instructor.  “I love to teach the benefits and strokes of infant massage to new parents in the community,” she says.  She also provides free instruction for new parents through Ranken Jordan’s community programming.

Sally—the daughter of a pharmacist and the nurse-turned-physical therapist—and Eliot—the physician— passed along strong health care genes. One of their daughters is an occupational therapist and another is a clinical psychologist at Ranken Jordan. Sally and Eliot also have a daughter who is a lawyer in New York. The pathway for their seven grandchildren is still to be determined, but it’s likely at least some will follow a health care track.

Sally has set a shining example for them and for her patients, co-workers, and future physical therapists as she continues her vibrant career at Ranken Jordan.

Daisy Award Winner is on a Mission